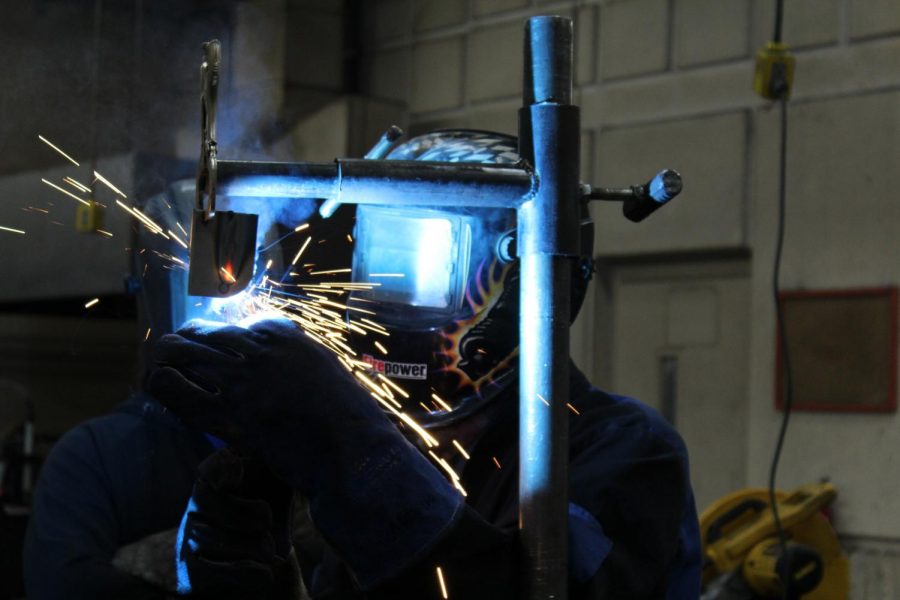 Abby Cook, senior, is one of many students who said technical school is the best choice for them . Cook has worn makeup to school every day since she was in the sixth grade and wants to make a career out of it.
“It [makeup] looked so horribly awful back then, but I have grown to love it so much and I think it’s a beautiful way to express yourself and grow self confidence,” Cook said.
Cook has big hopes for her career, but decided not to attend college.
Cook said she plans to attend a cosmetology school that offers combined programs such as esthetics, cosmetics, hair and nails.
After Cook completes this two-year program, she hopes to start her own small line of esthetics, an area of study focused solely on beautifying the skin.
Cook’s family supports her dream, but she knows cosmetology can be financially challenging.
“I am going into this confidently, hoping I will be successful, and if not, that’s OK. I will find something else that I enjoy doing,” Cook said.
Similarly to Cook, Kyia Fuller, junior, always wanted to go into cosmetology. Fuller said she wants to help people feel confident.
Fuller said despite the lack of financial stability in cosmetology, she will follow her dreams anyway.
“If I really want to do it, then I’m going to do it,” Fuller said.
Fuller’s grandma used to own her own salon, so she shared her passion for cosmetology, but also its hardships.
“I just think it would be cool to carry on that love for the job down,” Fuller said.
Aside from cosmetology, students plan to pursue other careers that don’t require a college education.
Alex Ure, senior, said he liked the idea of furthering his education and wants to pursue a career in welding.
“Through high school I found out I am good at welding and my instructors helped me see a potential career in welding,” Ure said.
Ure plans to pursue this career at the Missouri Welding Institute in Nevada, Mo., and take the Master Pipe Welding and Fitting course.
Ure’s family supports his career choice and he feels excited for his future, which he said will be successful. He hopes to climb the ladder of success after furthering his education.
“I am very passionate about welding and will work hard. I can make [my] future bright,” Ure said.