Working out intensifies this spring for Gibson, Linder, McRoberts 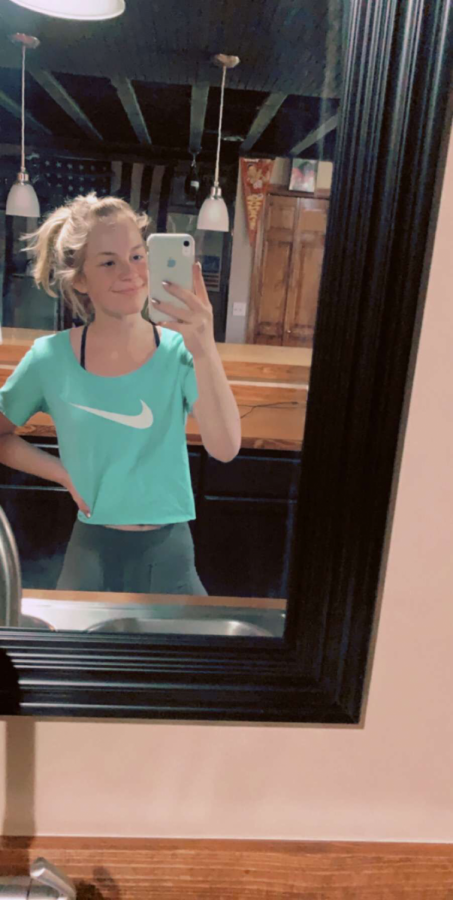 Katelyn Gibson, senior, has been working out since the beginning of the extended break by doing different types of workouts she creates, or ones that she gets from her MidAmerica Nazarene University cheer coach. She focuses on toning her arms, abs and legs by working out from 12 minutes to an hour while repeating the shorter workouts. Gibson saw something on Instagram that was posted by the coach, of one of her teammates talking about how “they are essence” and even though they aren’t together, and they don’t have practice, that doesn’t give them an excuse to not better themselves for their team.
“I don’t necessarily like working out in the moment, but after I feel accomplished and am happy I did it,” Gibson said.
She said she has gained muscle and endurance, enabling her to do more things she couldn’t do as easily in the beginning. Her biggest motivation is trying to be the best she can be. Gibson gave advice to anyone thinking about working out.
“It’s going to be hard mentally but don’t let your brain get in the way of improving your overall health,” Gibson said.

Andy Linder, junior, has lifted weights since sixth grade and worked out since he can remember. He works out at least four times a week which can include: He running three to five miles, running hills, and doing calisthenics such as pushups, curl ups, bench press and wall sits.
Instead of having a schedule, Linder works on whatever he feels needs the most work for 45 minutes to more than an hour. The thing that really pushes him to workout is the thought of losing at anything, he said he hates it. He uses this desire to win as motivation to push himself harder.
“Find your why. Motivation is key to dedication,” Linder said.
The benefits for working out can range depending on the person but for Linder, it has been winning and the happiness he feels when he sees the results in his track times for the 400 or getting a new bench max.
Instead of working out four times a week, Ashton McRoberts, junior, rides his skateboard every other day, ranging from about an hour and a half to three hours.
“I get time out of the house doing something I enjoy while simultaneously losing weight and staying away from food,” McRoberts said.
Since the weather has warmed up, it is a lot easier, he said. He enjoys skateboarding because it has increased his lung capacity and he has lost weight, his biggest motivation.
“When you start, don’t stop because it’s hard to start back up,” McRoberts said.
Tanner Petillo, sophomore, has been working out exercised for a few years, now but has increased the intensity.
“With arms, I hit back and shoulders also, with abs I also get strength in legs, in legs I hit thighs glutes and calves,” Petillo said. He has been doing full-body workouts to strengthen his with things such as arms, abs, and legs.
Boxing and basketball are what helped him to decide to start working out. Petillo enjoys working out and does it at least once a day. The benefits of working out for him have been his physical appearance and progress in speed and bounce.
“Stay committed; the results are worth it,” Petillo said.