Why Piper High School had their homecoming on Paola's field 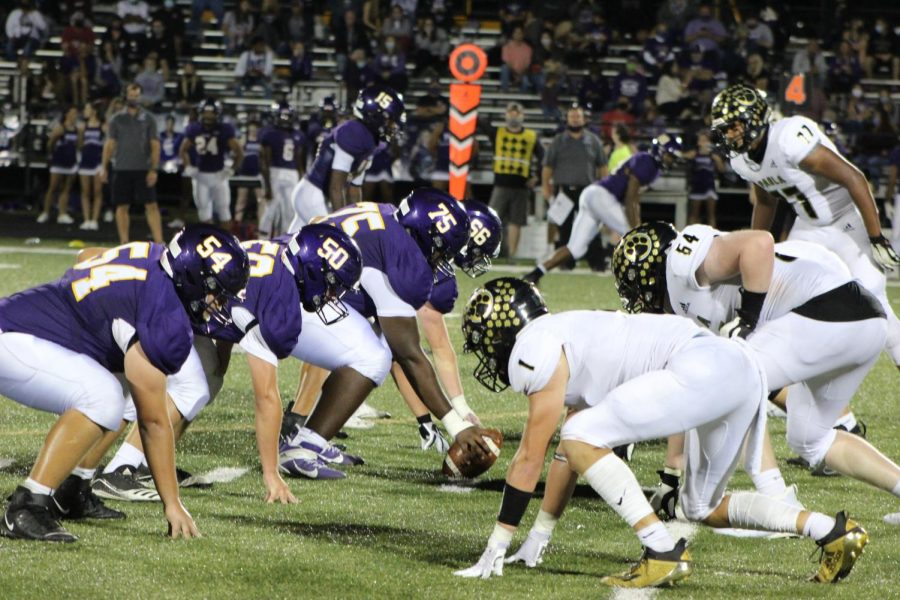 Piper High School wasn’t able to host its homecoming on its own field because Piper is in Wyandotte County. Because of the pandemic, no high schools in the county would host athletic events.
Piper reached out to Paola and on Oct. 9, Piper celebrated its homecoming on Paola’s field.
Mike Dumpert, varsity football coach, said he supported Piper hosting homecoming at Paola. When the game rolled around, Piper asked to wear its home uniforms since they wear their uniform for away games all season.
“I was fully understanding of their situation. They have been on the road all year and they just wanted to wear their home uniforms. Their comment was they wanted both teams to have equal wear [both teams wearing home uniforms,] but we just got a new set of whites and we’d only worn them once,” Dumpert said.
Dumpert said the situation motivated his players.
“Because there is so much going on for homecoming, you try to schedule an opponent you can beat because of all the distractions. I let our kids know that. I said ‘They picked you out, they think you’re that team,’” Dumpert said.
On the visitors side of the stadium the PHS cheerleaders rooted for Piper’s homecoming candidates. The cheer team watched Piper’s crowning for their homecoming to be as normal as possible, said Regina Hollinger, cheer coach.
Hollinger said she and the cheer team respected that Piper needed their help to give the high school students from Piper the same opportunity Paola had to have a homecoming.
Hollinger said she enjoyed being able to see another school’s crowning and so did the cheer team.
“I think it showed that even though it was their homecoming and it was a home game for us, we can still be respectful and help another team out,” Hollinger said.
John Nguygen, principal of Piper High School, appreciated Paola’s cheerleaders watching Piper’s crowning.
“It just added to the feeling that, even though we compete against each other as schools, that there are bigger things that join us together,” Nguygen said.
Piper planned to have its homecoming on the night they played Paola.
“Initially, we were just reaching out to see if Paola’s administration would be OK with us bringing a portable speaker system and doing a small Homecoming Court recognition on the visitor’s sideline so we wouldn’t disrupt anything for them,” Nguygen said.
Nguygen said Hines and Paola staff who helped set up homecoming did a great job helping give Piper’s students a homecoming they deserve.
“After our initial request, [Principal Jeff] Hines and [Activities director Darin] . Gagnebin truly rolled out the red carpet for us. They were awesome to work with,” Nguygen said.
Hines said he and all the other staff members who helped organize this event were happy to do so.
“After we agreed that we were willing to do it, we decided to go all in. It was work on our part but those kids deserved it,” Hines said.
Hines said he liked having the opportunity to be able to see somebody else’s homecoming and that this was a very positive experience for Paola and Piper. He also said he wouldn’t hesitate to do this again for another team.
“If basketball season rolls around and it’s time for their winter royalty crowning, and they want to come down here and do it, by all means we’ll make it happen for them. I’d hope they’d do the same for us,” Hines said.