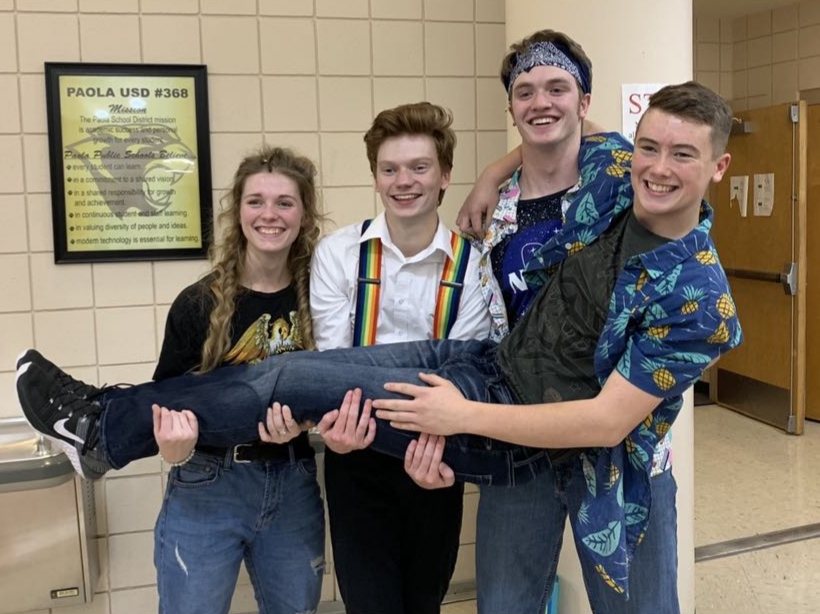 Freshman Layne Anderson felt supported by senior Jacob Farmer, second from left, as a freshman. Seniors Ashley Schwach, left and Creighton Markovich hold Anderson up after the production of Godspell this fall.

Layne Anderson, freshman, found it was easy to find a long-time friend in senior Jacob Farmer, who is also Anderson’s cousin.

When it was Anderson’s turn in the family to a freshman, he knew having Farmer around would make the transition easier.

“I was comfortable going into such a nerve-wracking place like high school,” Anderson said.

Farmer said one thing that helped them separate from the ups-and-downs of high school life was the opportunity to be a part of the stage.

“We definitely bonded the most over theatre,” Farmer said. “Ever since I was a freshman, and Layne saw my shows, he had said he wanted to do theater.”

In January, Farmer and Anderson participated in taking the theater’s production of All My Sons, to the Kansas State Thespian Festival in Wichita. It made Farmer reminisce about the fun he experienced when he was Anderson’s age.

“One of my first great experiences in high school was going to KTF as a sophomore,” Farmer said “So I was really glad to get to do it again and especially with Layne. I was able to kind of show him the ropes of the festival and able to see him experience it just like I did,” Farmer said.

Farmer sometimes looks back on his favorite memories when he first started high school, and remembers the same experiences Anderson is a part of now.

The ideas that Farmer holds dearly as a senior, are exactly what Anderson wants to accomplish when it’s his turn to finish his four-year journey.

“I want to have a positive effect on underclassmen and make it every bit as easy as I can for them,” Anderson said.

As the final weeks of high school come to an end, Anderson finds Farmer’s graduation bittersweet.

“It feels weird, and I don’t necessarily like the idea of him being gone,” Anderson said.
“Especially since he’s my closest cousin, and he’s been to every holiday and family event my whole life.”

If there was any way that Farmer wanted to finish his time in high school, it was to impact a newcomer at Paola High.

“I’ll give underclassmen the same advice they probably have heard a hundred times; get involved,” Farmer said. “Join a club or play a sport. Do something that makes school fun or else it won’t be.”

As Anderson looks ahead, he knows his first year will always be memorable.

“Getting to work on shows and stuff together was always a blast,” Anderson said. “I knew he would always be happy to help me.”