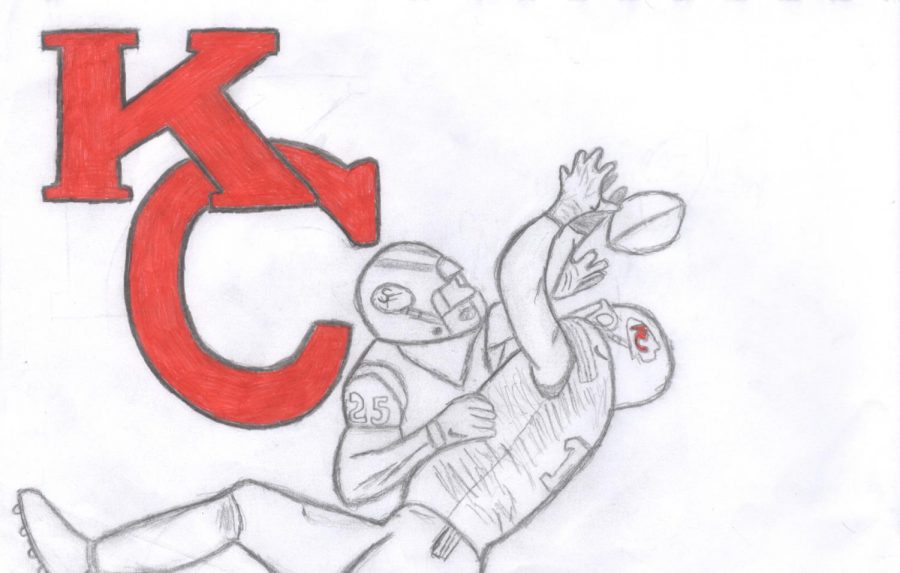 The Hard Rock Stadium in Miami was painted red on Feb. 2.
Quinton Weidenbach, senior, watched from the 50-yard line as the Chiefs defeated the 49ers in Super Bowl LIV, with a final score of 31-20.
Weidenbach, who travelled to the game with his family, said the crowd felt energetic and crazy.
The Chiefs led its fans through a nail-biting season and several people looked forward to seeing what they could do in the Super Bowl.
Lifelong Chiefs fan Kirby Kenny, foreign language teacher, said her favorite part of the season was the first playoff game against the Tennessee Titans on Jan. 19 when the Chiefs were down in the first quarter by three or four touchdowns and then they ended coming back from three touchdowns after the first quarter. “It just showed their grit and determination and that is why they are fun to watch,” she said.
Some fans said they were superstitious during the game.
“If something doesn’t go right, we change the way that everyone is seated, or something like that,” Kenny said.
Other superstitions included fans wearing the same socks or jersey on game day. Some fans had to eat certain foods. Cheese dip has been a tradition for some.
Jessica Ward, English teacher, said Demi Lovato could bring the Chiefs luck by singing the National Anthem.
“She sang it at the world series for the Royals and they won. So maybe it will work for the Chiefs too,” she said.
Despite any nervousness and doubt, some fans may have had about the big game, the Chiefs managed to have won after a fifty year hiatus.
Kenny said her favorite thing about the Chiefs was how well they worked together to make it to the Super Bowl.
“There is so much teamwork; everyone is involved, everyone has a job,” Kenney said. “It is not just one superstar out there.”
Several students attended the Chiefs celebration parade, Wednesday February fifth, including Dalton Picek, sophomore, who left at 5 a.m. to get a prime location. The parade started at 12:30 pm. Picek said he stood toward the end of the parade route on Grand Boulevard and then drifted to the rally as the players rode by.
Picek got his jersey signed by Tyrann Mathieu, number thirty two, at the parade. As he was walking back to his truck, Picek said someone came and offered him $800 for his jersey and he turned them down. Right now Picek said the jersey is at home. Waiting for the price of it to increase.